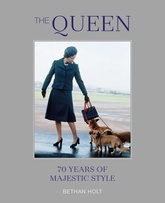 The Queen: 70 Years of Majestic Style

Queen Elizabeth II deployed fashion as a means to communicate and signal her position to the crowds who gather to see her in public and the millions who watched her television broadcasts: “I must be seen to be believed,” she said. The Queen’s attitude to dress reflected a visual landscape that began as genteel reportage in mostly black and white and has over the years evolved into today’s technicolor 24/7 news cycle, flashed around the globe in seconds and driven by social media. Incredibly, in her 70th year as monarch, the Queen felt as relevant as ever before—and she was, undoubtedly, a style icon. The Queen: 70 Years of Majestic Style celebrates the fashion evolution of Elizabeth II in her Platinum Jubilee year.