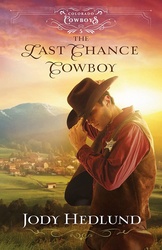 Release Date: February 14, 2023Presales available for members only. To purchase this title, please log in or join now.

When love gets dangerous

As a midwife, Catherine is successful in bringing new life into the world, but she's failed in finding true love. When she's accused of a murder she didn't commit, Catherine flees to Colorado to honor a patient's dying wish by delivering a newborn infant to his father.

The repentant prodigal Dylan is finally back in Fairplay. As sheriff, he's doing his best to prove that he's a changed man. When a woman shows up with an infant son he didn't know he had, Dylan is left with only complicated choices on what to do next.

Having grown attached to Dylan's son, Catherine doesn't want to part ways with the infant, but what she doesn't bargain for is how easily she'll fall for the charming sheriff, or how the past will put their lives in danger.