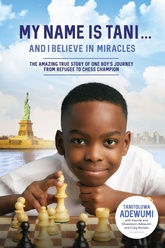 My Name is Tani...And I Believe in Miracles

Release Date: April 14, 2020Presales available for members only. To purchase this title, please log in or join now.

The beauty of unity and kindness

Tani Adewumi didn’t know what Boko Haram was or why they had threatened to kill his family. All he knew was that they were escaping to America.

The family lived in a New York City homeless shelter, while Tani’s father became a dishwasher and Uber driver, and Tani’s mother cleaned buildings. Eight-year-old Tani jumped into his new life with courage—and an unusual mind for chess. After joining the chess club in his public school, he practiced his game for endless hours. Less than a year later, Tani won the New York State chess championship.

With this stunning book, Tani and his parents tell us their incredible true story of sacrificing everything for family and then sharing generously all they received to discover the greatest riches of all.