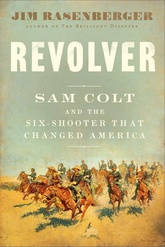 Revolver: Samuel Colt and the Six Shooter that Made America

Patented in 1836, the Colt pistol was the first practical firearm that could shoot more than one bullet without reloading. Its immediate impact was on the expansionism of the American west, where US soldiers came to depend on it, and Native Americans came to dread it. In making the revolver, Colt’s factory also revolutionized American manufacturing.

Revolver brings the profoundly innovative Samuel Colt to vivid life. In the space of his forty-seven years, he seemingly lived five lives: he traveled, womanized, drank prodigiously, smuggled guns to Russia, bribed politicians, and supplied weapons to the Union Army. Colt lived during an age of progress and unbridled greed. He not only helped to create this America, he completely embodied it.

“Sam Colt, quirky entrepreneur and era-defining tycoon, is one American history’s most colorful characters. How can you not like someone who sells hits of laughing gas to the American public in order to finance his gun factories? Jim Rasenberger captures this and other details in this comprehensive biography.” —S.C. Gwynne, author of Empire of the Summer Moon and Hymns of the Republic