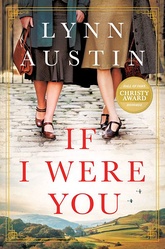 If I Were You

Faith and friendship in a time of war

1950, in the wake of WWII, Audrey Clarkson leaves her home in England for a fresh start in America with her young son. But she arrives to find that her longtime friend Eve Dawson has been impersonating her for the past four years. Unraveling this deception will force Audrey and Eve’s secrets--and the complicated history of their friendship--to the surface.

1940, Eve and Audrey have been as different as two friends can be since the day they met. As young women, those differences become a polarizing force…until a greater threat--Nazi invasion--reunites them. After devastating loss, both women must make life-altering decisions that will set in motion a web of lies and push them both to the breaking point long after the last bomb has fallen.