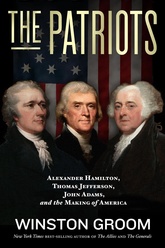 The Patriots: Alexander Hamilton, Thomas Jefferson, John Adams, and the Making of America

In this riveting narrative, author Winston Groom illuminates these men as the patriots fundamentally responsible for the ideas that shaped the emerging United States. Their lives could not have been more different, and their relationships with each other were often rife with animosity. But through it all, they led the charge—two of them created the Declaration of Independence, and the third established a national treasury and the earliest delineation of a Republican party.